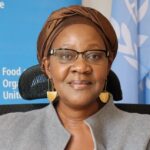 Food and Agriculture Organization of the United Nations (FAO)

Ms Carla Mucavi is the FAO Representative to Kenya. Prior to this appointment, Ms Mucavi worked as Director of FAO Liaison Office in New York from 2015. In this capacity, she represented the Organisation at the United Nations General Assembly, Economic and Social Council (ECOSOC), as well as related Committees, functional Commissions, and Subsidiary Bodies, ensuring that FAO mandate and strategic priorities remain at the centre of the Global Agenda, due to its relevance for the attainment of the 2030 Agenda on Sustainable Development. Ms Mucavi is a career diplomat having served in different functions in the Ministry of Foreign Affairs and Cooperation of Mozambique between 1989 and 2015. This includes the Division for International Organizations and Conferences; Division for Europe and North America and Latin America; as Deputy Director of State Protocol; and as Chief of Cabinet of the Minister for Foreign Affairs and Cooperation. She also served at the Embassy of Mozambique in Ethiopia. Between 2007 and 2015 she was Ambassador Extraordinary and Plenipotentiary of Mozambique to Italy, Greece and Malta, and Permanent Representative to FAO, WFP, and IFAD.A Mozambique national, Ms Mucavi holds a Bachelor’s Degree in International Relations from the Institute for Higher Studies in International Relations, Mozambique and a Master’s Degree in Cooperation and Development Planning from the University La Sapienza, Italy