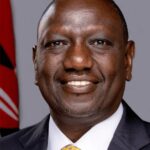 President of The Republic Of Kenya

Prior to becoming president, President Ruto served as the 11th deputy president of Kenya from 2013 to 2022. He previously served in several cabinet positions such as the Minister for Home Affairs, the Minister of Agriculture and as Minister for Higher Education. He worked as a teacher before joining politics and earned a lot of respect in that profession. Ruto entered the realm of politics when he started campaigning for the presidential candidate of ‘KANU’, the former president, His Excellency the Late Daniel arap Moi. This campaign was not just a great success, but it also proved his political skills. President Ruto’s leadership qualities helped him get elected to various positions in the government.

Ruto was elected Member of Parliament for Eldoret North constituency from 1997 to 2007, under the KANU and 2007 to 2013 through ODM party. He was the Minister for Home Affairs in the Daniel arap Moi administration from August to December 2002. Under the Mwai Kibaki administration, he was the Minister for Agriculture from 2008 to 2010 and Minister for Higher Education from April to October 2010. President Ruto ran for the deputy presidency in the 2013 election under the United Republican Party, becoming the running mate of Uhuru Kenyatta from The National Alliance (TNA). He was re-elected to the deputy presidency under the Jubilee Party in the 2017 Kenyan general election.

Ruto has authored several papers including a paper titled Plant Species Diversity and Composition of Two Wetland in the Nairobi National Park, Kenya.