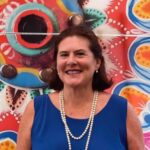 Amb Giovanna was previously responsible for Environmental agenda and was chief negotiator for negotiations under the United Nations Framework Convention on Climate Change (UNFCCC), Ministry of Foreign Affairs of Costa Rica. She also worked as director of International Affairs and Senior Advisor to the Minister of Agriculture and Livestock, Costa Rica.

Her experience extends to teaching having worked as a Spanish and Italian professor in the Linguistics Department, University of California, San Diego, USA in the past. Ambassador Giovanna holds a Masters in Science in Microfinance from the Université Libre de Bruxelles (ULB), Belgium and a Master in Business Administration, with emphasis in International Trade, San Diego State University (SDSU). She also has a specialization in European Union Public Policies, Organización Italo-Latino Americana (IILA), Italy and Belgium.

Amb Giovanna has also worked as a climate change negotiator for COP25, Pre-COP25 and COP 17 to COP21.