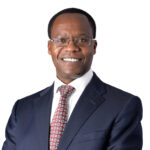 Prior to this, he held several executive positions at Absa Bank in South Africa, including CEO of Absa Africa and Head of Investment Banking, Sub Saharan Africa.

Before moving to South Africa, he spent close to 15 years in the United States where held several positions at both Bank of America and Credit Suisse First Boston. Mr. Gachora holds a Masters Degree in Electrical Engineering and Computer Science from the Massachusetts Institute of Technology (MIT), USA as well as an MBA from the Wharton School, University of Pennsylvania, USA.