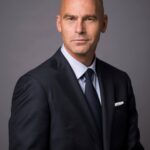 Patrick V. Verkooijen is the Chief Executive Officer of the Global Center on Adaptation, and Non-Resident Professor of Practice of Sustainable Development Diplomacy at the Center for International Environment and Resource Policy, Tufts University.

Patrick is the founder Chief Executive Officer of the Global Center on Adaptation (GCA), an international organization hosted by the Netherlands working as a solutions broker to accelerate, innovate, and scale adaptation action for a climate-resilient world. He helps ensure GCA’s programs focus on progress towards sustainable development to safeguard people, the planet, and shared prosperity. He was a driving force behind the 2021 virtual Climate Adaptation Summit, hosted by the Netherlands, which included a Ministerial dialogue on climate adaptation that focused on how to accelerate efforts to build forward better from the COVID-19 pandemic.

Prior to his appointment he was Head of Agriculture and Climate Change at the World Bank. Prior to that he worked as the Senior Partnership Specialist at the World Bank. Within the Sustainable Development Network (SDN) at the World Bank he focused his activities, amongst others, on the development of the international architecture on forest finance within the climate change context, most notably the development of the Forest Investment Program, which is entrusted with approximately US$600 million in donor commitments. Prof. Verkooijen’s has experience as a key negotiator for the Department of International Affairs at the Ministry of Economic Affairs, Agriculture, and Innovation in the Netherlands. As such, he has extensive experience in multilateral environmental negotiations and in negotiations within the European Union with a particular emphasis on sustainable development issues.

Prof. Verkooijen acted as senior advisor to the President of the United Nations Forum on Forests, which concluded an international instrument on forests after fifteen years of stalled negotiations within the UN. Prior to his involvement in natural resource policy, he acted briefly as advisor to the Special Representative of the Secretary-General of the United Nations in Sudan and was stationed in Khartoum.

In his capacity as Adjunct Professor at Fletcher, he is also a Lead Author of the Global Forest Expert Group (GFEP) on the International Forest Regime, as established within the United Nations framework of the Collaborative Partnership on Forests. The scientific assessment -bringing together over 50 leading political scientists worldwide – aims to contribute to the international forest deliberations by bridging the science-policy divide.

Dr. Verkooijen is also a Visiting Professor in Global Forest Diplomacy at the Forest and Nature Conservation Policy Group at Wageningen University and Research Centre in the Netherlands