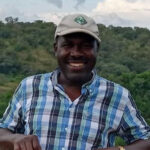 Dr. Patrick Omeja received his training at Makerere University with stints abroad at McGill University.  He is a biologist, and a conservation scientist interested in forest restoration and given the importance of elephant in African ecosystems has a keen interest in elephant ecology.  He has worked in Kibale National Park, Uganda for over 22 years, looking at forests, forests cover change, and its role in  nutrition, stress, and climate change in determining primate abundance, while also exploring how to best to conserve the world’s biodiversity. He now plays a central role in the operation and promotion of Makerere University Biological Field Station.  He is acutely aware that for conservation projects to work, they need to involve the local communities, and thus has initiated and is a key player in several conservation programs in Uganda.

One conservation approach that he and his colleagues found to be especially rewarding is to promote conservation action by helping the local communities around Kibale. Some examples of this approach include building a health and conservation clinic that provides subsidized health care and education to residents near the park and establishing a mobile version of that clinic. He is also passionate about training the next generation of conservation scientists, currently, he is concentrating his training efforts on Ugandan conservation scientists.