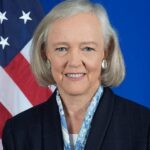 Amb., Embassy of the United States of America Kenya

Meg Whitman was named CEO of Hewlett-Packard in 2011. Since then the firm, which oversees hardware, software and services for businesses, has projected annual revenues of more than $50 billion. In 2014 Forbes magazine placed Meg 20th in their list of the 100 Most Powerful Women in the World and in 2008 The New York Times cited her as one of the women most likely to become the first female President of the United States. Her most prominent role prior to Hewlett-Packard was as President and CEO of eBay between March 1998 and late 2008. Meg led the company to become an unparalleled global e-commerce engine. Her past expertise in brand building, combined with her consumer technology experience, has helped eBay evolve into a leading company that has revolutionised online commerce, payments and communications around the world. Prior to eBay, Meg Whitman was general manager of Hasbro Inc.’s Preschool Division, responsible for global management and marketing of two of the world’s best-known children’s brands, Playskool and Mr. Potato Head. During her tenure, Meg oversaw the reorganization of the Preschool Division and its resulting return to profitability. From 1995 to 1997, Meg was president and chief executive officer of Florists Transworld Delivery (FTD), the world’s largest floral products company. While at FTD, she oversaw its transition from a florist-owned association to a for-profit, privately owned company. Before FTD, Meg Whitman served as president of the Stride Rite Corporation’s Stride Rite Division where she was responsible for the launch of the highly successful Munchkin baby shoe line and the repositioning of the Stride Rite brand and retail stores. She has also held the positions of executive vice president for the Kids Division and corporate vice president of strategic planning. Meg spent 1989 to 1992 at the Walt Disney Company, highlighted by her work as senior vice president of marketing for the Disney Consumer Products Division. She also worked for eight years at Bain & Company’s San Francisco office where she was a vice president. Meg began her career at Procter & Gamble in Cincinnati where she worked in brand management from 1979 to 1981.